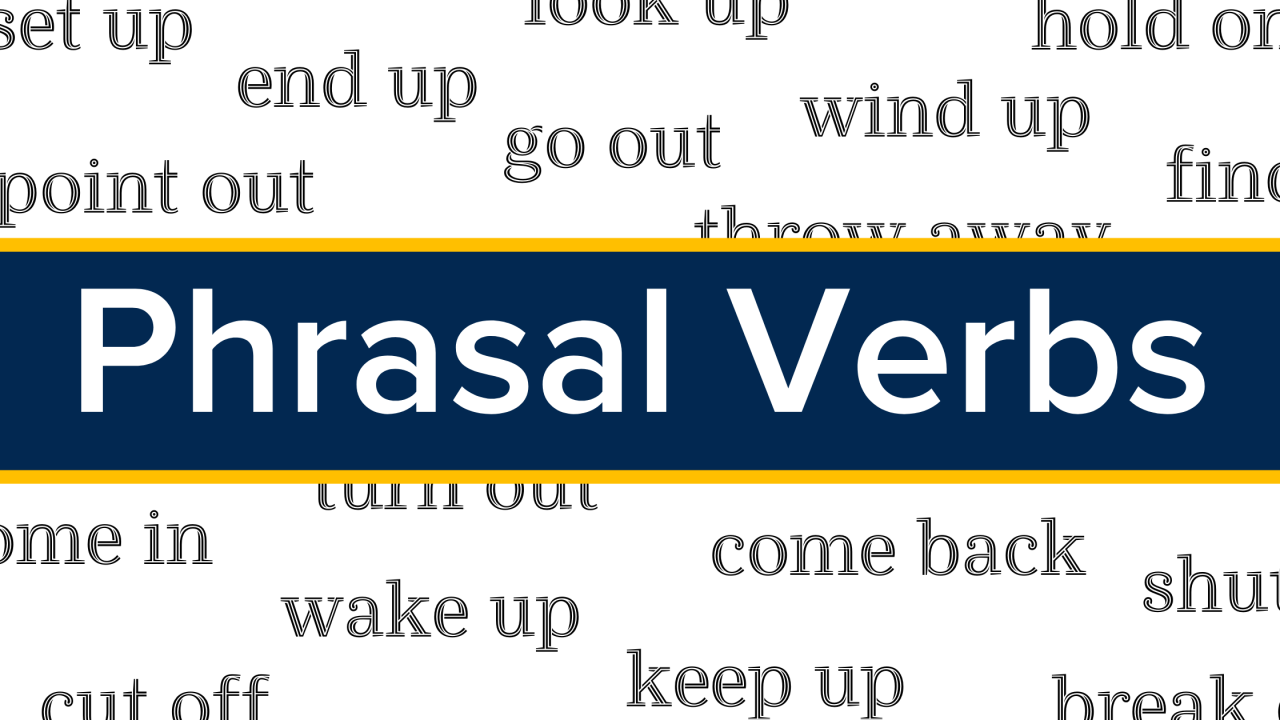 Phrasal verbs (like look up and find out) present many challenges to non-native English speakers. In this article, we'll review those challenges, offer some tips to help you handle them, and share activities and resources for helping you improve your mastery of these verbs.

Challenge #1: They're Hard to Recognize

Phrasal verbs can be hard to recognize since they are composed of two or more components, a main verb + one or more particles.

Particles look like prepositions (e.g. in, out, on, etc.) or adverbs (e.g. away, etc.), but they behave as part of the verb and not as prepositions or adverbs. Let's look at an example.

They ran up the hill. (verb + prepositional phrase "up the hill")

They ran up the bill. (phrasal verb "run up")

In the first sentence, the main verb is "run," and the phrase "up the hill" describes where they ran. In the second sentence, the phrasal verb "run up" is used. In this context, "run up" means "greatly increase" as in "My friend ordered too many appetizers and really ran up the bill." Since these two sentences look very similar, though, it can be hard to recognize that a phrasal verb is being used if you aren't familiar with that verb.

Challenge #2: They Have Multiple Meanings

When you look up phrasal verbs in the dictionary, you'll often find a long list of meanings. One study found that frequently-used phrasal verbs had an average of 5.6 meanings (Gardner and Davies, 2007). So, if you want to study a list of 20 phrasal verbs, that means you actually have over 100 definitions to learn!

Challenge #3: They Look Similar to Each Other

Many phrasal verbs have similar constructions. For example, we have several with the main verb come:

come in, come up, come out, come on, come back, come down with, etc.

We also have many phrasal verbs that use the same particles:

This can make it really easy to confuse phrasal verbs and say something that doesn't mean what you intend.

Challenge #4: The Grammar is Tricky

When all the pieces of a phrasal verb appear together, it looks almost like a one-word verb:

The car broke down on the side of the road.

I looked up the definition in my book.

You've probably noticed that they don't always appear this way, though. Some phrasal verbs can be separated and allow other words to appear between the parts, while others are non-separable and need to stay together.

The car broke on the side of the road down. (incorrect!)

I looked the definition up in my book. (correct!)

The rules for separation depend on whether the verb has a direct object and whether the direct object is a pronoun. We'll save those details for another post, but just know that those rules can produce sentences like the following:

The car broke down on the side of the road.

I broke down the problem step-by-step.

I broke the problem down step-by-step.

I broke it down step-by-step.

But the sentences below are generally viewed as incorrect.

I broke down it step-by-step.

The car broke on the side of the road down.

"Idiomatic" means that the combination of the words has a meaning that is different than what you may expect from the individual components. Some phrasal verbs are quite literal and can be easily understood even if you haven't seen them before:

Can you fill up my coffee?

Even if you have never seen "fill up" before, you can probably infer that it means something like "completely fill."

Idiomatic phrasal verbs, on the other hand, can be harder to understand if you've never seen them before.

I think I'm just going to give up.

In the above example, "give up" means "stop trying," but this meaning is not immediately apparent from the combination of "give" and "up."

Use of Phrasal Verbs in English

You may be asking yourself, "Do I really need to learn phrasal verbs?" Well, the basic answer is yes.

Phrasal verbs are incredibly common in English, especially in spoken English. You need to know common phrasal verbs to help you understand what people are saying and to help people understand you.

Ex. A: Do you want me to pick you up from campus? We could go out for dinner and stop by Target on the way home.

Ex. B: Do you want me to retrieve you from campus? We could dine in a restaurant for dinner and quickly go shopping in Target on the way home.

So, if these challenges make you want to avoid using phrasal verbs when you speak, that's completely understandable! They are definitely one of the more challenging vocabulary items to learn and master in English, but if you spend some time practicing these important verbs, it should be easier for you to communicate with fluency in English. The tips and resources below can help you start becoming more skillful and confident with your use of phrasal verbs.

Start with practicing the most frequent phrasal verbs and their most frequent meanings. The Phrasal Verb (PHaVE) List compiled by Garnier & Schmitt (2015) provides the 150 phrasal verbs with the highest frequency, and you can explore and practice them using the link below! 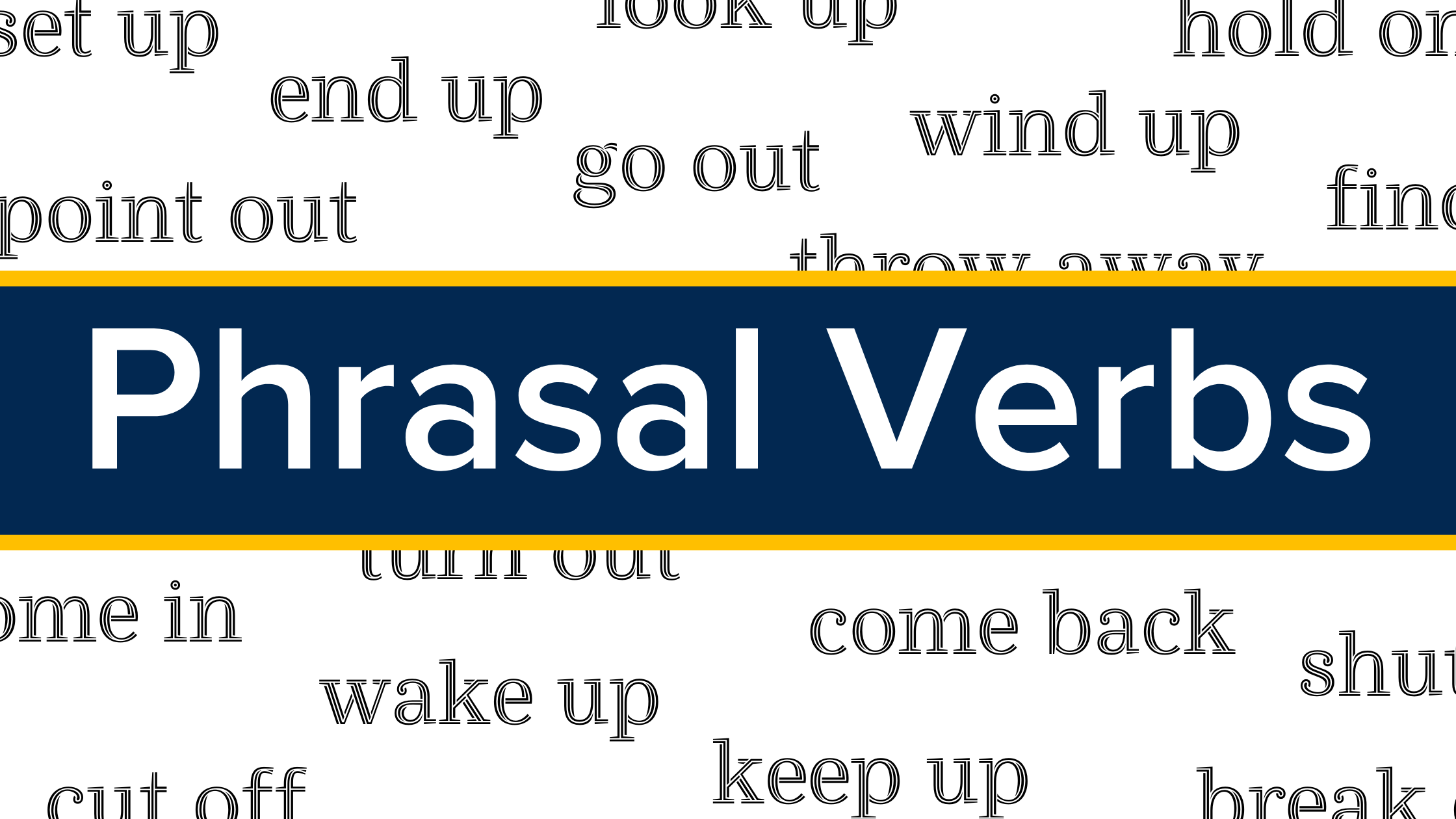 Particles like out and in have some commonly-used meanings across phrasal verbs, and it can be helpful to gain a general understanding of those meanings. If you're interested in learning more, you can take a look at Word Power: Phrasal Verbs and Compounds by Brygida Rudzka-Ostyn, which is freely available to UC Davis students online. The particle descriptions start on page 14.

As you learn new phrasal verbs, think about how YOU would use them. Write phrases or sentences you may use in the future that use those phrasal verbs, and review them regularly. Just a couple minutes of reviewing your list each day can make a big difference in your ability to use those terms while you're speaking.

Tip #4: Look Up Definitions and Examples

Finally, use a comprehensive resource for looking up and seeing how phrasal verbs are used. Our favorite online dictionary for this purpose is the Oxford Learner's Dictionary.

Grammar: Past Simple vs. Present Perfect